Little Study of the Saami, Finns and Scandinavians

As large sample sizes have a tendency to drown the 4 sample Saami clustering I have done a small study using only 4 individuals from each population to try to infer the Saamis relationship with other populations. Only 12 of the 41 participants is included in this analysis but its interferance should apply to the rest in general depending on your clustering in the earlier posten local plots using only Norwegians, Swedes, Finns and Saami.
What have been used:
Ref pop: French, Italians, Hungarians, Romanians, Vologda Russians, Chuvash, Norwegians, Swedes, Finns and Saami. Siberians: Ngan, Dolgans. 4 samples from each cluster.
Number of SNP: 530k (not pruned) - 22 autosomal chromosomes.
PLINK MDS plot dimensions: 3
EUROPE ONLY
Dimension plot D1-2:
1. D1: This dimension on the right-left axis may reflect possible Siberian ancestry levels among the populations. Two Saamis reach the same level as the two of the Chuvashes. Finns follows close after together with two Vologda Russians. To the far left we find Italians who are most geographical distant appears to have the least of this influence. See also Europe plus Siberian plot including four unadmixted Siberians.
2. D2: This dimension on the top-bottom axis may reflect extremes between the Saami and Finns on the top and the Chuvashes at the bottom and where contintal europeans and Scandinavians appear as intermediate but closer to Saamis and Finns. Saamis and Finns are at the same level in this dimension suggesting a common background in this dimension while central-europeans share considerable more with the Chuvashes maybe from eastern influences that didnt reach the Saamis and Finns to the same extent. 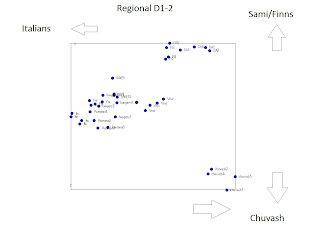 Dimension plot D2-3:
3. D2: The top-bottom axis is the same as in D2 so the comment there is the same here.
4. D3: This right-left dimension appears to divide the Saami and the Finns. Here the Saami share the far right with 1 French and 2 Italians and 1 Romanians as a close follow up in what appears at first as the western or central part of a continental european cluster. The Finns appears on the left side of the continental cluster that appears as the eastern part of a continental europeal cluster together with Vologda Russians and Scandinavians. This suggest that Finns and Scandiavians have a more eastern origin than the Saami in this dimension who appears far western. 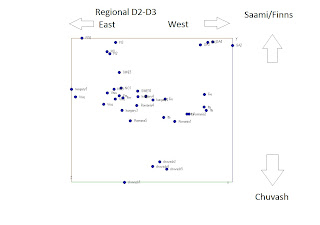 SUMMARY EUROPE ONLY:
* Saami at first glance appears to have the largest "Siberian" ancestry followed by Finns and then Vologda Russians. Scandianvians appears at the same level as central-europeans. (D1)
* Saami and Finns appears to share ancestry. Scandianvians and Continental Europeans and Scandinavians appears to have more eastern influences pulling them closer to the Chuvashes. (D2)
* Saami have what appears at first to be a western component pulling them far "west" than both Finns and Scandinavians who appears as far "east" as Vologda Russians. (D3).

-> This analysis may suggest that part of the "West" origin of the Saami do not have its root in recent Scandianvian admixture.
EUROPE PLUS SIBERIANS:
Dimension plot D1-2:
1. D1: This dimension on the left-right axis appears to be between Siberians to the far left and europeans to the far right. The Saami pull to the left the most after the Chuvash then followed equally Finns and Vologda Russians. Scandinavians appears to stay the same as continental-europeans in this respect see comment D1 in the EUROPE ONLY analysis.
2. D2: This dimension on the top-bottom axis appears to be with the Saami in the one extreme and the Italians at the bottom. Finns follows the Saami just after. The Vologda Russians and the Chuvash fills the void between the Saami and Finns vs the Scandinavians who appears to be at the "northernmost" part of the long continental european cluster. The Vologda Russian cluster appears to bridge to the Finns. Siberians appears here to have something in common with central-europeans maybe admixture however in ADMIXTURE runs the selected 4 Siberians do not appear to have european admixture.
Dimension plot D2-3: 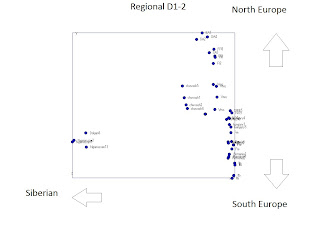 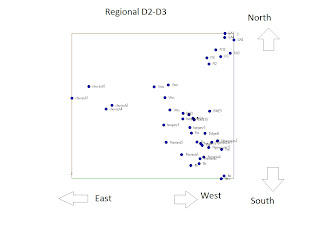 SUMMARY EUROPE WITH SIBERIANS
* Saami at first glance appears to have the largest "Siberian" ancestry followed by Finns and then Vologda Russians. Scandianvians appears at the same level as central-europeans (D1):
* Saami appears far west in D3 while Finns and especially Scandinavians cluster with central-Europe.
* Saami appears uppermost or norternmost in the D2 plot followed by Finns, Vologda Russians/Chuvash and Scandinavians, then central-europeans and southern Europeans at the bottom.
Lagt inn av Anders Pålsen kl. 12:20