I will this time look more into the details of the previous post with the large Chromopainter run.

In the process of generating the data and the making of the previous post I noticed there was a certain variation among Finns. I will here try to look into the genetic data of the our Finnish participants together with Saamis, Estonians and Lithuanians as reference.

Please note I dont have geneological info for all so the analysis will contain certain degree of uncertainty.

Lets first look at the proportions. First note that that the bars and colors for the Koryak in this persentation is made indepentent of the one from the other populations. The Score is calculated by simply multiplying the proportions for each populations. Later averages will be used. 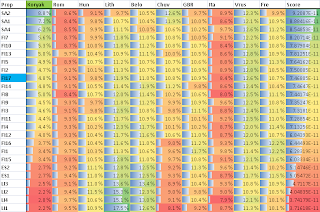 The score basically appears as a reverse of the Koryak and Chuvash. We clearly see a gradiant from Saamis to the Estonians and Lithuanians. Lithuanians and Estonians shows of course strongest similarity to the Lithuanian and Belorussian donor populations while the Vologda Russian influence appears to be similar distributed among Finns even among the Saamis. Chuvash and Koryak seem to the main reason for division of Finns here.

Number of Shared Segments or ChunkCounts

Same comments as above. 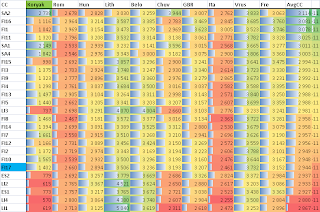 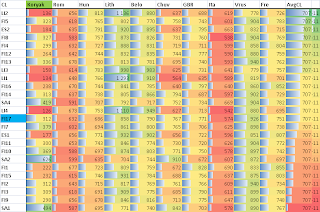 The segment size, that is the total shared divided by number of shared segments corrected for proportion. We still see the Saami and Lithuanians at each end. 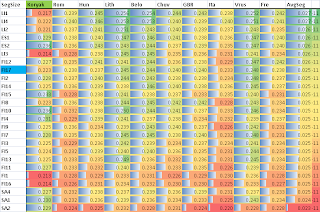 As we can see here from the occurance of green Finns appears to share larger segment sizes with Vologda Russians, Lithuanians and Belorussians, some Finns even with some Chuvash influence. On the other side Finns have smallest segments to Italians, Romanians and Hugarians.

The muation densities also again shows the Saamis and Estonians at different ends of the scale. As we can see here Lithuanians appears to have the most red and yellow vs Finns. Not before we meet the Saami it turn green. Then we have the Hungarians and British. The most distant appears to be the Chuvash, Romanians and French.

The data seem to suggest different influences for the Finnish populations that divide them genetically. The different segmentsizes and mutation densities suggest that the influences have arrived at different times from same or different sources.