New Chromopainter analysis is ready. Structure much the same as earlier analysis but I have this time added more populations and population controls.

ChunkCounts or number of segments shows the Saami and Finns appears similar to many donor populations and together shows the strongest affiliation to the Vologda Russians, but on average the Saami shows stronger affinity to the Koryaks, to the Chuvash and to the Vologda Russians. The Finns on the other hands shows stronger affinity to the Lithuanians.

The Scandinavians shows a very similar profile to the donor populations seeming closest to the British, French and Lithuanains and in general appears closer to the Meditterian populations.

The Lithuanians and Estonians seems closest to the eastern populations like Lithuanians, Belorussians, Ukrainians, Vologda Russians and Mordovians. In general more distant to the Medditerian populations.

The picture for total shared is much the same as the analysis above.

The picture is much the same as the analysis above.

The numbers show much the same that have been seen before. The Saami appear as before to have largest mution density to most of the donor populations, then the Norwegians, then the Swedes, then the Finns and finally Estonians and Lithuanians.

In the controls we can see that several control individuals like f.ex the British shows a similar mutation density as the Lithanians and Estonians, while f.ex the Spanish appears to have very high mutation density compared to most of the panel. The reason for these may be many: 1) the Spanish are an older and larger population and therefore have accumulated more mutations over time 2) there is "foreign" haplotypes among the Spanish or in this control that increase mutation density.

The problem is probably cased by difference in number of unique mutations between the populations making direct comparisment difficult. However in general it appears like especially Lithuanians appears more "matchy" to other populations when it comes to mutation diversity meaning their haplotypes matching other populations appears to have less mutation difference. Some other reason may also be that 289k may not bee enough to give proper numbers of mutation counts to give a clear picture. In previous analysis the PCA of the mutation counts was much more fuzzy than those made from ChunkCounts and ChunkLenght. 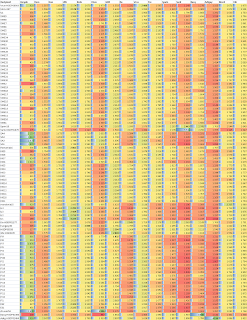 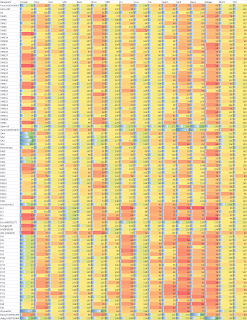 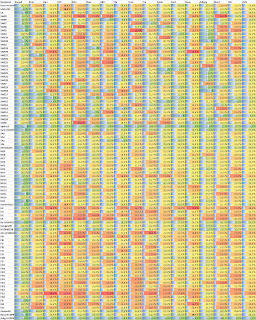