You may have wondered how much percentages this and that dimension account for in the MDS plots. Here I have attempted to give a impresions of that by extracting those SNP's that drive the MDS dimensions and running it in ADMIXTURE at K=2. Remember that the MDS plot picks those group of SNP that show the largest variance given the dataset.

This is the first dimension a (largest variance) across the X-axis (horizontal) in the MDS plot in ADMIXTURE (58k or 20% of the SNPs).

The first dimension shows Saamis and some Finns at the extreme left of the graph. The Italians are alone at the extreme right of the plot. Scandinavians appear to have a middle position. This distribution may reflect the agricultural expansion.

This is the second dimension a (second largest variance) across the Y-axis (vertical) in the MDS plot in ADMIXTURE (42k or 14.5% of the SNPs).

The second dimension shows again Saamis, some Finns and one Swede at the extreme left of the graph (but only one Finn FI3 appears togehter with the North-Saami in both dimension 1 and 2). The Lithuanians and Belorussians are alone at the extreme right of the plot. Here the Scandinavians and the rest of the Finns follow up afterwards at the left side of the graph. The distribution may suggest an expansion from western Europe to Fennoscandina including Saamis and Finns. The Lithuanians who live close to the Finns appears here to be sharply different from them.

The third dimension (third lagest variation) across the Z-axis in the MDS plot in ADMIXTURE (39k or 13.5% of the SNPs) is more fuzzy.

The MDS plot is still picking up variation but begins to pick up more individual variation than regional variation seen in the two earlier dimensions. However there still appears to be possible to see some trends in the data. Lithuanians and Scandinavians appears to occupy mostly the left side of the plot while mostly Italians, Finns and especially the Saamis appears to occuppy the far right of the plot. However the clustering may seem abit odd as it also include Italians and some Romanians among the Saamis and Finns. Maybe it reflect some expansion from north-east Europe through Romania to Italy or wiseversa or something of common origin. However in this plot the different  populations appears to blend much into each other giving very unclear population trends because of the large individual variation.
Lagt inn av Anders Pålsen kl. 13:30 1 kommentar: 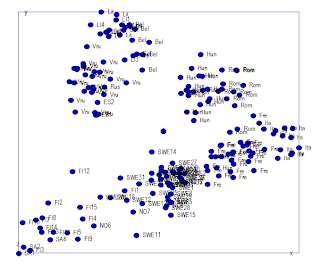 The removal of these individuals have contracted the Finns and the Saami. Please note however that the Saami still seperate from the Finns in the 3rd dimension (not seen).
Lagt inn av Anders Pålsen kl. 14:07 1 kommentar: