In earlier posts I have indicated that dimension 1 in the later MDS plots was of Sibieran origin. This I assumed based on similarities with the clustering with or without Siberians. I have now done a new review with the Siberian and conclude thats not the case. This is the plot in question I have published earlier. In the plot below dimension 1 (horisontal) I suggested to be a Siberian (left) vs European (right) dimension while dimension 2 I suggested to be an western European (bottom) and eastern European dimension (top). After new insights this may need some more modifications: 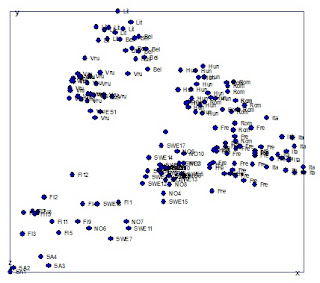 I did a new run with the current panel. I added 4 unrelated Sibierans (Ngaans and Dolgan) into the panel. This gave the following MDS plot: 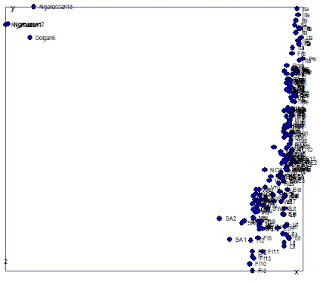 Impossible to see the details here but the general impression is that Siberians is a fairly distant population. Dimension 1 here is the horisontal axis where the extreme left is Siberian while the extreme right is European. Dimension 2 appears to be an internal European dimension with the North Italians at one extreme while the The Finns appear on the other extreme suggesting the dimension is a north-south dimension. The Saamis appears to stick out somewhat from the Finns. In this image its hard to see the details so lets us zoom in. 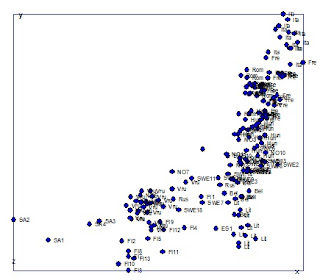 However as the plot shows above the European dimension (D2) isnt more informative than showing an North-South influence. We have an additional dimension 3 and when we compare it do dimension 2 we get a very familiar MDS plot to the one seen at the top just rotated left 90 degrees: 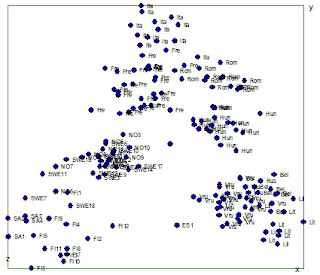 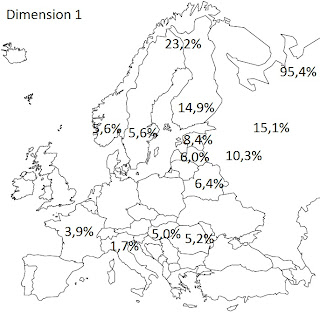