Investigating the genetic background of Finns

We continue the analysis of the latest MDS run now looking at the Finns. In the plot it appears that Finns divide into several groups with different origins.

The first group is the Karelian group. These are individuals with most of their background from from Finnish Karelia. FI10 is entirely North-Karelian. This cluster appear to have somewhat lower Siberian influence than the Saami but with more similarites with Vologda Russians than other Finns as they appear to pull in the direction from the North-Saami and below mentioned Finns. FI2 who is outside this cluster pull even more towards the Vologda Russian cluster.

The second group is a more mixed group with ancestry from Tornea river area, Oulu, Lappi, Finnsih Karelia, Central-Bothna, NW, SW and Central Finland. FI5 who have ancestry from Western Finland pull slightly toward the Scandinavian cluster. The proximity of this cluster to the North-Saami in D2 is interesting it could mean Saamis have a close common background with this cluster in this dimension. However in D3 (not shown) this affiliation disappear. Else these Finns appear to pull slightly towards both Scandianvians (especially FI5) while FI3 and FI6 pull towards the Karelians and The Vologda Russians. Interestingly in linguistic research the Saami self designation is suggested to be come from the Häme (Tavastia) region in West/Central-Finland.

The third group is F4 and FI9 who appear together to form a Bothnian cluster. Both have most or all of their background from this area. This group appear to be intermediate between the second Finnish group and the Scandinavian cluster. NO6 position here is the result of this individual beeing a mixture of Scandinavian and North-Saami and so is only artificially in this cluster, as in D3 this affiliation vanish while FI4 and FI9 stays put to each other in D3 (not shown) between the second Finnish group and Scandinavian. FI9 appears to pull more towards the Swedes while FI4 appears to point towards the "other end" of the Scandinavian cluster. 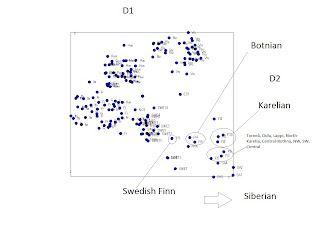