In end of April 2012 the ancient Gotlander hunter gatherers genome was published by the University of Uppsala. I will now provide an ADMIXTURE based analysis of these samples using project and public published population panels.

The samples was downloaded from authors website and then subject to most of the quality controls as done by the authors. I extracted the relevant SNP for the Ajv's and Ire8 ending up with 22k SNP using three individuals combined into a composite individual.

The composite sample was then subject to control ADMIXTURE and MDS analysis using "haplotized" (phased in BEAGLE) French, Yoruba and Han's as reference populations. The composite individual clustered entirely with French. 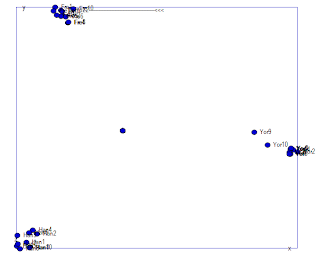 I then merged the composite individual with an "haplotized" (phased in BEAGLE) European panel with populations all within the European continent from different public available population panels and run it through ADMIXTURE at K3. Closely related individuals in the panel was removed. One Russian was removed because of odd clustering, reason unknown.

The result was then averaged over populations to get an overview: 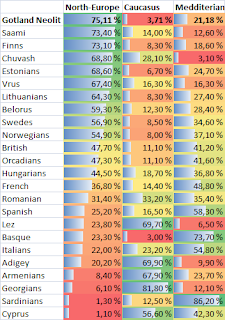 As we can see the individuals clustered into 3 main components, North-East Europe, Caucasus and the Mediterian. The Gotland composite neolitic hunter gatherer tops the list of North-East Europe populations, then the Saami and very close follow up the Finns.

In modern individuals you may see that that Scandinavians, British, Lithuanians, Estonians and Finns appears less affected by Caucasian influence than continental European populations like Chuvash, Vologda Russians, Belorussians, Hungarians,French, Spanish, Romanians, Italians and Sardinians. Among the Saamis we see an elevated Caucasian influence. Its possibly linked somehow to the Chuvash. See posts below.

The Mediterrian influence appears to have been less in the North-East among Chuvash, Saami, Finns, Vologda Russians and Estonians, Note the somewhat higher rate among the old Gotlander. This all suggest that the Meditterian influence arrived second after the initial post glacier migration then later a migration from the Caucasus. The latter from Caucasus didnt reach the Basque. There may be support for this suggestion in the paper by Huyghe 2010:

The Caucasion migration appears to have reached the Saamis in particular from the vicinity of Chuvash and then through the Vologda Russians. See Chromopainter analysis below.

SUMMARY: It appears like Finns and Saamis have the best match of modern variation with these ancient Gotlander hunter gatherers. Note however that in this analysis not enough Saamis to provide proper clustering in ADMIXTURE or MDS. This means Finns and Saamis quite often have been lumped togheter in this kind of analysis.