I will this time look more into the details of the Scandinavians based on the main post with the latest large Chromopainter run (see two posts below).

In the last post we could infer something about the genetic history of Finns. I will here try to look into the genetic data of the our Scandinavain participants together with Saamis and Lithaanians as reference.

Please note I dont have geneological info for all so the analysis will contain certain degree of uncertainty.

First note that that the bars and colors for the Koryak in this presentation are made indepentent of the one from the other populations. The score for proportions is calculated by simply multiplying the proportions for each populations. The rest of the tables use averages. 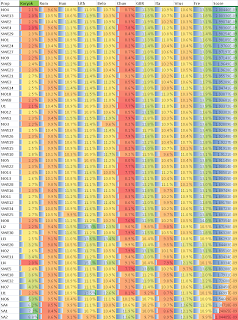 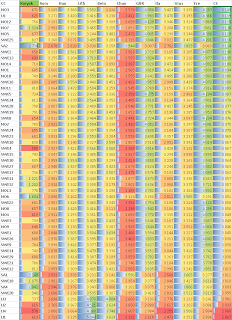 Same comment as above. Note that the average sums to 707 for all. 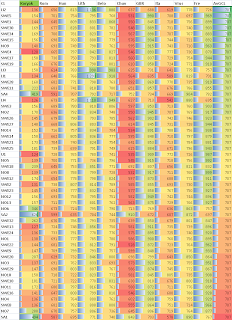 The segment size, that is the total lenght of segments (ChunkLenght) divided by number of shared segments after correcting for proportions. 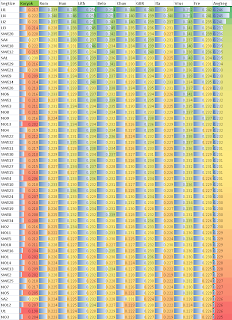 We also see that after the Lithuanians and Estonians its mostly Norwegians who appears to have in general the smaller segmentsize to the continental european donor populations. On the upper half of the table Swedes dominate until the Saami at the top of the table.

This may suggest that many Swedes are in general more closer to the continental Europeans than Norwegians.

The counts of related but not indentical haplotypes corrected for proportions shows as expected the Lithuanians controls at the bottom of the table with the least general mutation divergence the continental European populations and especially to Lithuanians but also Belorussians and Hungarians.

So it appears from the general interferance that Swedes and Norwegians have different divergence influences when it comes to mutations. The connection of Norwegians beeing mutationally closest to Hungarians and at the same time more distant to Swedes is abit suprising but the difference is not great and may be within margin of error.

We see Saami distribute mostly at the upper upper half, we then see that the Swedes and Norwegians appears to distribute down to the lower half. In the lower lower half we find Lithuanian controls. At the top we see U1 who has confirmed geneologically half Scandinavian orign and half British Isles and some minor non-european admixture. The origin of NO14 is also half Fennoscandian and other half Belgian/Dutch. This may for some reason explain their higher mutational density beeing similar to one of the most divergent Saami.

The close runner ups SWE8 and SWE19 have ancestry/partly ancestry from central-Sweden. It may suggest the existence of "older Scandinavian" stock in central-Sweden that have been less affected by later migrations from continental-Europe. 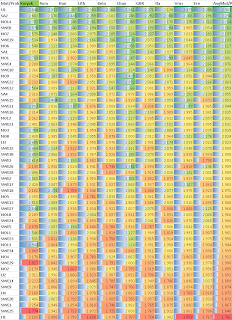 Scandinavians appear to have received different influences at different times. The average segmentsize also seem to suggest that part of the Swedish populations have diverged later from the continental populations than Norwegians. There also seem to maybe exists Scandinavian "isolates" as seen through the high mutation counts after correcting for proportions especially for some Swedes even the average Mutation density appears similar to Lithuanians..

However this interpretation must be taken by caution as these individuals do not appears as consistent as Saamis in their placement in the different tables. As an example SWE8 who appears as close runner up to SA2 in Mutation density appears average when it comes to segmentsize and ChunkCount density. SA2 however do appears consistent in all these cateogories with small segmentsize, high ChunkCount density and high Mutation density - all consistently suggesting large divergence time.