I have now updated the analysis to cover all of the genome from chromosome 1 to 22. The resolution have increased but most of the structure remains the same.

There have been limited sub-structuring compared to the analysis reported by other genome blogger using somewhat similar population panel. It is possible that one reason for this is the inclusion of Saami individuals have stolen the "show" smoothing over smaller differences within other populations.

In general the heat-map and plots confirms the earlier findings from the MDS analysis plots using only genotype data but do provide more details about the MDS plot clustering. The data seem to be in accordance with earlier scientific research that the genetic landscape of Europe is usually of small genetic distances with the exception of Saamis and Finns.

The plots for the number of shared segments (chunkcounts) and the total lenght of these segments (chunklenght) and the shared mutations are mostly consistent with the MDS plots done earlier. 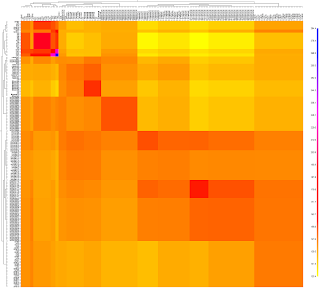 The Saamis seperate into one group. The Finns seperate into two groups. The first group consisting exclusively of Finns is basically eastern Finns. The second group appears to be affiliated with the Botnia region consisting mostly of Finns and some individuals from Sweden with at least partly Finnish ancestry and with at least partly known Saami ancestry. Scandinavians cluster in one group. 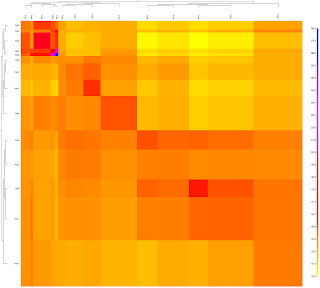 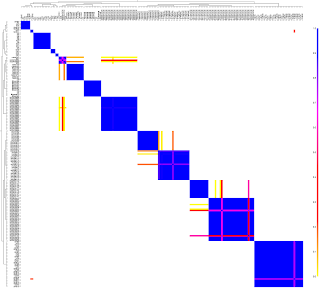 The PCA plots is similar to the earlier MDS plots but here mirrored, 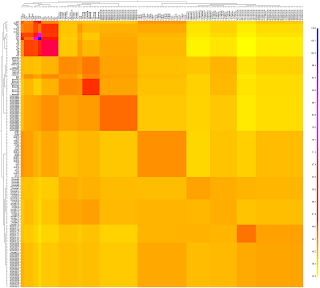 The map shows that Saami, Finns and Lithuanians have larger lengths of the shared segments than other European populations. Larger sharing of the genome usually means a more recent history but not always. The larger sharing can indicate events in more recent genetic history like population expansion, genetic drift or limited gene-pool since the founding of the populations due to isolation. 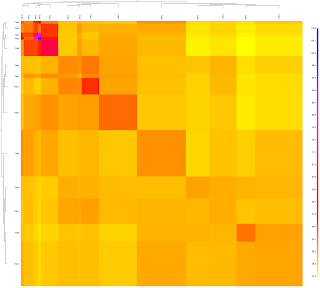 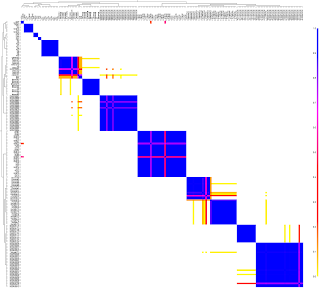 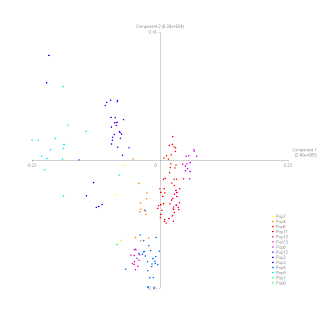 The PCA plot is in line with the earlier MDS based analysis having a very similar structure. 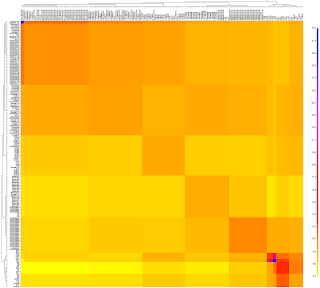 The mutation matrix shows a genetic landscape of largely closely related mutations with the exception of Saamis and Finns that separate at the highest level of the tree. Scandinavians appears in this heatmap similar to continental Europeans. Saamis and Finns appears to separate more clearly from each other in this plot than in the maps. 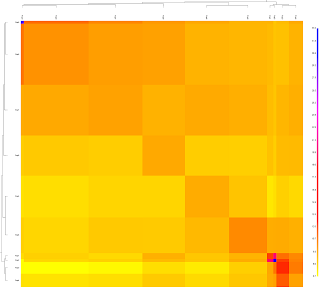 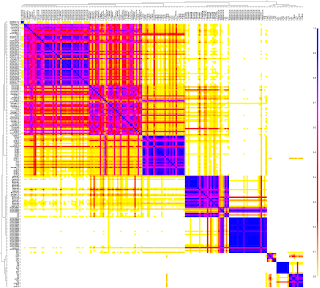 This is probably the most useful plot for the individual. It shows the degree of mutational relationship between individuals, in other words who are your closest related haplotype match in the cases you do not share identical haplotype segments. It also give an impression of the group relationships that appears to correlate with the distances seen between the groups in the MDS plots f.ex Italians are the most distant to the Vologda Russians.

The Saami and Finns do not appear to have any clear relationship with these groups except within themself and somewhat between themself. The two Finnish groups appears to have limited mutational sharing. 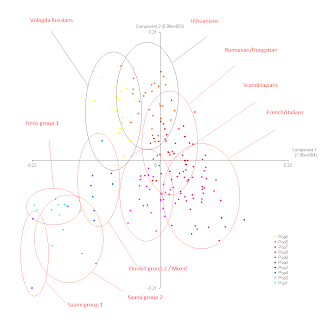 The mutational matrix PCA plot resembles the earlier described structure seen in the PCA plots for the ChunkCounts and for ChunkLenght and in the MDS plot analysis done earlier.

The Botnian Finns appears closer to Scandinavians and Vologda Russians than the eastern Finns and the Saamis.

The results for the Saami and Finns appears consistent for all maps and plots including the earlier MDS plot analysis. They appear to have a clear separate history from the rest of Europeans in the panel and mutations not seen in other populations appears to be at least part of the explanation for why they separate genetically from the rest of Europe. It is still possible that at least some of the unique mutations belong to populations further east not included here but this would be the goal for maybe the next analysis round. This may be the reason why two Italians appears very distinct from others in the mutation matrix but not in other plots.

There appears to be some inconsistency for Saami and Finns vs others in the maps. In the mutational matrix maps they appear to seperate from other Europeans at the highest branch, but at the ChunkCount and ChunkLenght heat maps they come under the same second highest branch as Vologda Russians, Lithuanians and Belorussians. This may indicate that there may have been some recent geneflow from these populations or as proxies for some other populations that have reached the Saami and Finns resulting in increased number of shared haplotypes and with larger lenghts. This recent geneflow of haplotypes do not appear to have been there so long that they have resultet in new mutations resulting in increased relationship in the mutational matrix maps.

There are also inconsistency between Finns and the Saami that could have the same explanation as above. There appears to be similar ChunkCount and ChunkLenght sharing between Saami, Finns and the mixed individuals but on the mutational matrix there appears to be sharper differentiation betweens Saami and Finns but with a somewhat higher mutational sharing between Saami and Finns compared to the above mentioned analysis maybe reflecting partly common older shared genetic history.

The Finns also appear to have divided into two clusters. The first cluster contains exclusive of Finns from eastern Finland while the other group containing Finns from the coastal areas also contains 3 individuals from Sweden with at least partly Finnish ancestry.

The Scandinavians appears to affiliate much more with continental Europeans in all maps and plots than the Saami and Finns but do at the same time show distinctions (as they do in the earlier MDS plots) and they appear to relate to other continental groups consistently. The closest continental groups appears to be French, Italians, Hungarians and Romanians.

The mutational matrix indicate close relationship with continental europe but there is some distinction in mutation haplotyes indicate that there have gone some time since the seperation from continental Europe.

The more "normal" ChunkCounts and ChunkLenghts among Scandinavians seem to be consistent with the same also seen among continental-Europeans.