Changes from the last analysis: Added Bulgarians. Used complete reference popualtions. New participant FI23. FI4 have opted out. Else same specifications as in earlier runs. Adding more individuals increase the accuracy of the software but the increased diversity may smooth out smaller differences.

As we can see here from the previous run is that the main PCA dimensions have switched from the last run and we see the main structure we have often seen in the standard unlinked SNP MDS plots run through Plink software.

PCA plots shows independent genetic variations. The first dimensions shows the largest variations while the second dimensions shows the second largest variation and so on. A indvidual with equal background from two different populations would typically appear in line in the middle between these populations, so would also be the case for recently mixed populations. If foundereffect and genetic drift have occured in a population the population would typically not be in line between populations, however on PCA plots its also quite possible that the limited number of panel populations can give a similar effect on the PCA plot. In this PCA plot we are looking at the number of chunks (genetic segments including identical and related segments that have mutated).

As commentet in earlier post it appears like in the PCA plot D1-D2 (D1 horizontal, D2 vertical) that Scandinavians pull away from the other European populations because of Finnish-Saami like admixture early in its founding as they as a group all have it in various minor degree. It explain its in-line location between British and French and the Finns-Saami. It can be confirmed in the ChunkCount heatmaps (see results section) where Scandinavians shows strongest connections to these populations, but do not show same influence to other continental European populations. In experiments mixing events give lower number of chunkcounts to parents populations than the parents have to their own populations and within the new mixed population. We see this in Scandinavians, West-Finns and mixed groups like the two Bothnian groups. More recent mixed individuals vs Finns and Saamis is to be found further upstream towards the Finn and Saami. 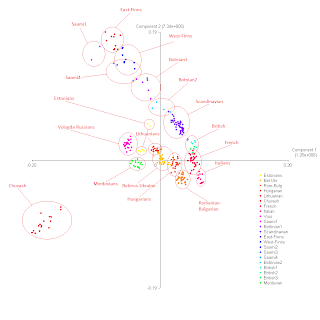 We also see this in the PCA plot D1-D3 (D1 horizontal, D3 vertcal). However the combination with the D3 dimension make to difference the influences on the Scandinavians. We see that the upper half of the Scandinavian cluster is totally dominated by Swedes. It appears like Swedes may have got more influence from Finns while the Norwegians on the other hand appears be more influenced by the Saamis. The pull upwards may be because of a weaker relationship to Lithuanians according to the heatmap. 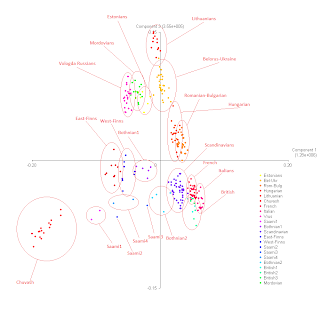