How genetic similar or disimar where your parents ancestry? (updated)

How genetic similar or dissimilar your mother and father ancestry is of some interest in infering your past genetic history. In scientific language its called "Runs of homozygosity" or simply "ROH" and are segments of identical blocks of DNA on your autosomes that you received from both of your parents.

In one hypothetical extreme if your parents where closely related like cousins you would have a few large segments of ROH or if both came from the same population isolate or village but not recently related, many small ROH segments. On the other side if your parents where of very different origin  you would probably have very few and short ROH segments. In fact ROH works similar to 23andme's Relative Finder by finding common segments between your parents. If sharing many segments, probably related, if sharing few or no segment not related.

ROH therefore provides insight on whether your ancestors derived from a small isolated population, were of mixed or urban origins, or even if there was consanguinity in your lineage.

I have attempted to reconstruct a similar analysis provided by Etnoancestry using PLINK's ROH functionality. I used the following parameters (default settings):

The ROH run for each participant is presented in the graph below. As shown there appears to be great variation between the samples. The Y-axis represent the number of ROH segments found while the X-axis represent the sum size in Mb for all those found ROH's. In the one extreme FI10 and SWE16 is found to have the largest  number of ROH's and the largest total size of ROH or in other words they had parents with the most similar ancestry. On the other extreme you find NO7 and NO11 both of mixed backgrounds, the first Norwegian-Saami mix and the second Norwegian-Swedish mix (and possibly some minor Saami/Finnic mix), in other words they had the parents with the most dissimilar ancestry. 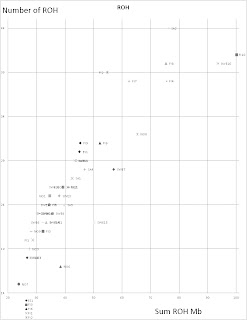 So then the question naturally of course arise, do these individuals with high ROH is the result of recent inbreeding or consanguinity? The answer can be infered by calculating the average segment size by dividing the total size of ROH with the number of ROH found. If the calculation result in a few large segments its indication of recent consanguinity as few recombination events have divided the ROH into smaller pieces since the consanguinity, however if the calculation result in many number of small ROH its an indication that your came from a small population isolate with little consanguinity in recent times as recombination have split the ROH segments into many smaller pieces.

The calculation of the average ROH block size among all members appears consistent with a scenario with no recent consanguinity for all participants (visually confirmed with actual data). To illustrate it SA2 who score very high in both number and sum of ROH but the average ROH size isnt so much different from NO7 who's have the least similar ROH.

In MDS plots having a individual with extreme ROH would have similar effects like having related samples resulting in own clustering. In 23andme's Relative Finder individuals of from same population isolate would appear artificially as closer relatives than they actually where.
Lagt inn av Anders Pålsen kl. 09:53