It appears that the local analysis been done so far had weaknesses. It appears not managed to catch all people of at least partly South-Saami ancestry. I suspect the reason have been in the MDS program itself with different sample sizes in clusters and numbers of clusters affecting the result especially for partly mixed individuals. When including more outside populations it appears to make genetic distinctions clearer within Fennoscandia possibly from the earlier mentioned reasons.

In the earlier local analysis it appeared obviously that samples NO6, NO7 and SWE7 must have been at least of partly Saami background with especially SWE7 plotting "weird", but not as obvious for sample SWE11 who earlier in the local analysis showed some weak pull out of the Scandinavian cluster. In this newest MDS run however SWE11 seperated very clearly from the Scandinavian cluster together with unrelated NO6 and SWE7.

Lets look first at the new MDS plot. In this plot top-bottom axis appears to be east and west geneticially speaking with the Vologda Russians and Belorussians at the top edge representing the most eastern population and Saamis at first glance the most "western" population with following Finns, Scandinavians and French.

So what differentiate North-Saami from South-Saami? It can be shown in the plot below. In Dimension 2 (D2) where the North-Saami and South Saami cleary is alone at the lower part of the plot in the extreme "West". Obviously both Saami group share ancestry in this common European dimension. This picture however change when we compare to Dimension 1 (D1) that shows levels of Siberian ancestry. Here the North-Saami peaks together with eastern Finns to the far right, while the South-Saami have levels comparable to Swedish Finns.

So apparantly SWE7, SWE11 and NO7 have South-Saami background. 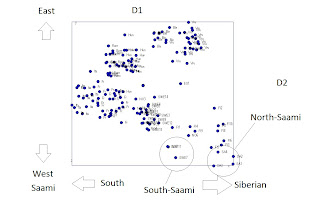